One Scope to Rule Them All…. Not Really but Close 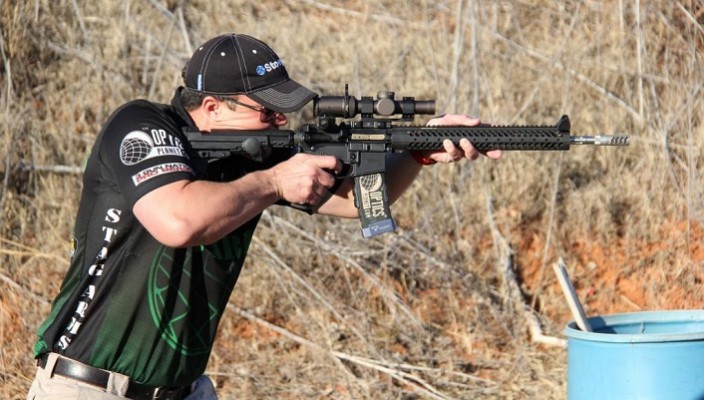 Normally when sponsored 3-Gun Pro’s (myself included) do reviews, you can see right through the typical BS of “This xyz scope is the best at everything, yada yada.” I’ll tell you right now, I’m not going to do that. What I will do however is go over what I truthfully like about the Vortex Razor HD II with the Jerry Miculek reticle. Why?????Well for starters there are several features that have allowed the Razor HD II to make its way atop the rifles of many competitive shooters. First and foremost, the 6x magnification is like wrapping everything in bacon, a very good idea.  In almost all 3-gun matches, the most time consuming and difficult to shoot are the courses of fire with long range rifle shooting.  It more often than not decides the outcome of the match.  Moving from the past generation of 1-4x scopes to a 1-6x Razor makes finding and hitting the far targets so much easier.  You can’t hit what you can’t see, right?

The next and in my opinion most important feature of this scope is the kickass BDC reticle designed by none other than World Champion Jerry Miculek. The long range part of the 3-gun game is all about accuracy but all the accuracy in the world isn’t any good if you can’t get your hits fast.  Since you don’t have time to dial in windage or elevation adjustments on the clock you either have to be really good at Kentucky windage or have a stellar reticle such as the JM-1.  The subtensions (the horizontal lines under your center dot) in the JM-1 reticle will work with pretty much any common .223 or .308 load on 2-3 MOA size targets out to distances of 600 yards. The crystal clear glass found in the Razor is high on the list of desirables with any optic. Sure the 6x magnification will help you find and see targets at distance,  but the top notch glass in the Razor will let you pick out the details of your target downrange letting you see the details and edges of the targets so you know exactly where you are putting your shot.  I know most of you reading this probably aren’t competitive shooters, so let me rephrase things.  The clarity of the glass can mean the difference between simply shooting at the body of an animal, to making a much more well placed head shot or heart shot.  Furthermore and sometimes even more importantly, clear glass will let you see your misses so you can quickly make corrections to get back on target.

Next up is the field of view (FOV). When the magnification goes up the FOV goes down.  The more it goes down the harder and slower it is to find the next target and the next target and so on.  The wider the FOV the better and this scope has one of the largest FOVs on the market. How big? So big in fact that it won’t force you to come out of the glass to lift your head off the gun aka bird doggin’.  FOV is also just as important on the 1x magnification as it is on 6x.  When hosing those CQB type targets we often times find ourselves swinging the gun up to 180° side-to-side.  Without a wide FOV you won’t be able to find that next target quick enough. Last but definitely not least, is the forgivingness of the eye box. In any dynamic shooting situation such as 3-gun, hunting or self-defense you want as generous of an eye box as you can get and yet the Razor HD does not disappoint.  You can mount the gun hastily and still see through this scope even if your cheek weld is not perfect every time.

As much as I overwhelmingly like this scope, it isn’t without its downsides. I know I sound like a diva but the color is on the wrong side of the cool spectrum for me. I could see if I had my AR or a Scar 16 in FDE, but this satin doo doo bronze looks goofy on my rifle. Of course you could always take a can of Rustoleum’s finest to it but I’d rather it was offered in a black anodizing from the get-go. My other small but worth noting gripe, is the weight. Luckily I’m no stranger to heavy guns but you muscularly challenged guys (and girls) are definitely going to notice the added heft when shooting for extended periods of time.

What else can I say about the Vortex Razor HD II with the JM reticle? It certainly doesn’t turn you into Jerry Miculek as soon as you slap it on your gun. No, those skills you have to earn but what it does do is give you the same type of tool (riflescope) that all of the pro 3 Gunners are using but at one hell of a price.

Now quit reading about shooting and go out there and do some of your own, JT Out!

Click here to get the Vortex Razor HD II 1-6 with the JM reticle. Use my coupon code TISC556 for 5% off this scope and anything else on OpticsPlanet.com 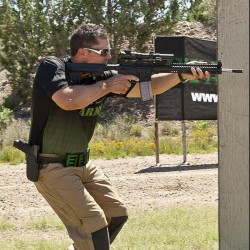 Jesse Tischauser
As a lifelong shooter and son of a firearms dealer, Jesse Tischauser was a natural when he entered the competitive 3 gun scene. Former Army Staff Sergeant, Jesse can be found in the top of the leaderboard at any number of 3-Gun and USPSA matches across the country, including the 3-Gun Nation Pro Series.

12 Responses to One Scope to Rule Them All…. Not Really but Close