The OTHER Hard Case Company 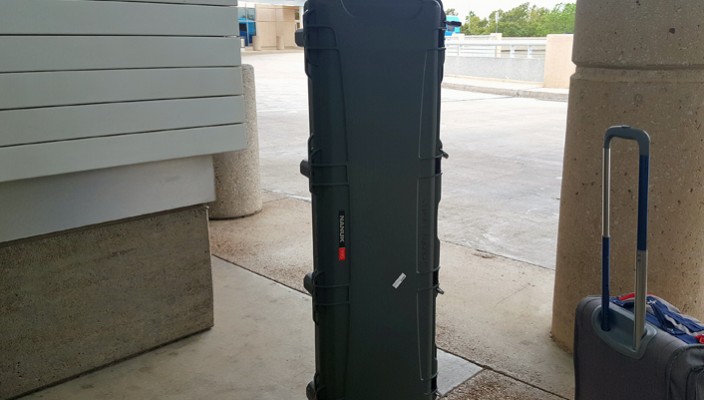 When you think hard plastic case manufacturers, Pelican is usually the brand that comes to mind. They’ve been around for a hell of a long time and make cases that work, so why would you even think about taking a look at a different brand?

Being the rebel without a cause that I am, I decided to go out on a shooting centric limb and try out a new long-gun case from a company many people aren’t familiar with, Nanuk Cases. I’m not going to bore you with the spiel about who they are as a company and what they’re all about. That sort of thing looks great on a press release but I know you came here to get the scoop on what makes their case so great, so without further ado…. Now before I go into detail about what tickles my fancy about Nanuk’s 995 hard case, I should probably tell you what I’m using the case for. I, like a growing population of people in this country, have become obsessed with the sport of 3-gun. (If you’re scratching your head as to what I’m talking about, check out this informative guide here by pro shooter Jesse Tischauser that explains the sport in detail.)  3 Gun quite matter of factly requires you to use three guns, a shotgun, pistol, and a rifle. The larger national level matches are all over the place and usually mean that you’re flying with your guns to the match. Considering that this sport is super gear intensive and the guns aren’t exactly small, you’re left with trying to stuff your weapons in a 50ish inch hard case. As any semi frequent flyer knows, the golden number for checked baggage is 50 lbs. If you don’t hit that magic number, you’ve turned a $25 baggage fee each way into the worst $100 ever spent each way. Since most of us flying to matches can just not bring essential items like mags, slings, etc., to save weight the only other way to shed pounds is by finding a hard case doesn’t weigh a plastic metric ton.

Because of what can only be described as engineering sorcery, the 995 case by Nanuk comes in at 21.6lbs with foam. While its closest competitor is tipping the scales with foam at 23lbs. Sure we’re talking a difference of only 1.4 pounds but that little bit is the difference of flying with a gunsmithing tool kit or not.   See where I’m getting at?

The craziness doesn’t stop there, on top of it being lighter it’s also larger in every dimension than its similarly sized/featured competitor. For those of you that can’t put two and two together, this case can carry larger and heavier gear, guns, whatever, and still keep your baggage fee’s from pillaging your wallet.

On top of the larger dimension and less L-B’s, the 995 case is packing some seriously whiz bang features that sure you don’t need but will more than appreciate when you’ve had to travel eleven hours in one day and just want to get home from a match.

Working from the top down, the spring loaded carry handles are a huge plus because we all know when sliding gear in the back of a pickup bed that if the handles on your case are sticking out they’re getting busted or snagging on something, preventing it from sliding out freely.

Cinching the case closed are Nanuk’s “Powerclaw” latches which give you a lot of leverage or closing power especially when trying to cram a bunch of stuff that doesn’t fit inside the case. Not only do they help initially close the case but they keep is sealed like Fort Knox during the deliberate destructive handling of airport baggage personnel. Another feature that I really appreciate on the 995 case are the stainless steel reinforced lock loops. Since I’m on the subject of locks, there’s a total of four spots for you to throw a lock on this case. When you’ve got four locks on the case it makes it damn near impossible to pry out any area of the case as most would-be thief’s would do.

There’s always a catch…….. You’re right, I’ve left out a semi-crucial detail, the price. With a street price of basically $100 more than its closest rival case it might scare away some of you cheap asses out there. And there’s nothing wrong with that but realize that you’re overlooking hands down best hard case for the money because of a few bucks difference.