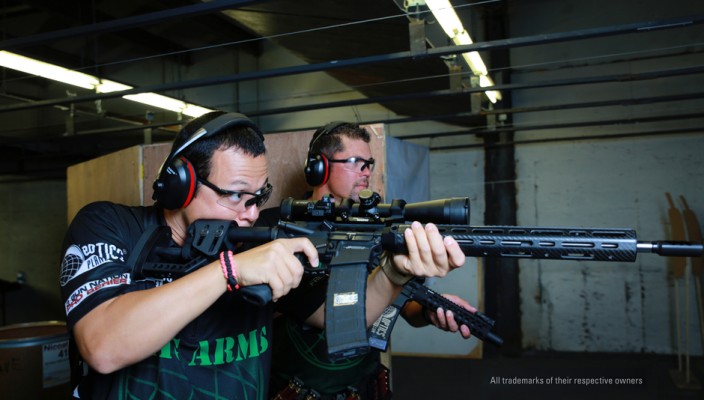 Tired of your buddies shooting better than you at the range or during competitions? I got to sit down with professional 3-Gun competitors Jesse Tischauser and Kalani Laker to talk about how shooters of any  level can increase their shooting skills.

1.Know When To Call It Quits At The Range:

How many rounds should I shoot every time I go to the range to get better?

Jesse-Once you get past 500 rounds you’re probably just pulling triggers, unless you really got your own range with a serious setup and targets. I mean most guys cant even go and draw their pistol and its really difficult you know? For the average shooter I’d say more than 200 rounds you’re probably wasting time because a lot of guys are just trying to make one hole in the paper.

Kalani-Between 50 and 250 of each weapon. I’d say even more than 125 rounds of shotguns is a waste. Not to mention you’d be killing your shoulder.

Is it possible to shoot too much?

Jesse– At some point you’ll start to develop bad habits from shooting too much at the range at once. You’ll start  doing stuff like mag dumps and trying to shoot a smiley face. Like I said unless you’ve got a really good range that has the stuff you’re trying to compete in , bulls eye, IDPA, whatever it is, unless you’re practicing that then its counterproductive. I mean I’ll go out with 500 rounds and by the end I’m hip shooting stuff lol and just trying stupid stuff because you get bored. 2. You Don’t Always Need To Be At The Range To Practice.

If we can’t get to the range every week what else can you do to get better?

Jesse-For USPSA, there are guys that all they did was dry firing and within a year they’re grand masters, the highest rank you can get.

Jesse-You know Airsoft really works. I mean I have 3 airsoft guns and targets and all that stuff, its just more fun to shoot real rounds. I just don’t have the time to. One of the guys I shoot with in Oklahoma, he has like $2,000 in targets and $5,000 in airsoft guns. He shoots a lot of airsoft. He has a $600 airsoft JP rifle. I mean for the weapons manipulation that stuff is all the same. The weights are really close to your real gun and they’re blow back so you get a little bit of recoil. I mean its not the same recoil but the whole thing is just moving and shooting. You’re just trying to manipulate that trigger and line up the sights as fast as you possibly can.

Do I need to fire my gun a lot to get better?

Jesse-I mean a ton of people say nothing replaces live fire but man you can get pretty darn close. When I first started I dry fired every day for 30 minutes. With firearms, nobody shoots a lot of everything. If you’re a hunter, you shoot a few times a year. If you’re a tactical ninja in your garage you probably never shoot. Even law enforcement officers don’t use their firearms a lot. How to incorporate stress into your training?

Jesse-My buddy Chris and I have done some you know jumping jacks and pushups. Most of the action shooting stuff, you’re just running so you just run 20 yards over there and that’s going to get your heart rate up.

Kalani– In my opinion the best way to do that is to find as many people that shoot and get them to watch you shoot, its tough. For me, I stress about everything when I shoot. The level at which I want to perform is so high. What I do is I set a goal that is pretty much unobtainable. But for most people the best way is to have competition amongst friends. Because you want to show off and you really hope it works. Like “hey guys watch this” and then you mess up and everyones looking at you. Also do everything on a timer, that’s what I do even with the airsoft. So shoot with an audience, do the “I can do it this fast, can you beat me?” and always using a timer.

How do you get comfortable with the anticipation of the buzzer?

Jesse-Man you never really get used to that shot timer. Every match I get a little amped up before the first stage and tell myself “don’t f this up”. I haven’t found a way to mimic that feeling or way to train for it. Unless you’re at a match you cant mimic that feeling of anxiety or nervousness of not wanting to fail. 4. Learn To Shoot On The Move

Not a lot of people have the opportunity to actually shoot while moving, how can you train for it?

Jesse-Well p90x and all that stuff helps. Shooting on the move is all about staying low and shooting from a squatting position. Its like the same thing I said about being fast, those guys that are quick they’ll be shooting like they’re taking a dump. If you do that a lot , the stronger you’re going to get. To better answer your question, to practice shooting on the move you need to focus how to separate your guns and hands from the rest of your body so you’re almost moving on rails. This definitely comes into play when you’re using a long gun because you have the stock hitting you and your hands stretched out. Airsoft is a great tool for practicing this.

Kalani-Shooting on the move is the absolute pinnacle of practical shooting. It involves speed, accuracy, transition speed, weapon handling, weapon splits and it truly is what separates the great from greatness. Actually all last year, I dry fired while using an elliptical in my house. Because of the nature of an elliptical It was great at keeping your shoulders level and transitioned right over to the real thing.

Getting your eyes to move quicker.

Jesse-I’ve asked my eye doctor if there are eye drills, you know a lot of it is how fast your vision is at transitioning from target to target. There’s things you can do to make your eyes faster but there’s no one that’s professional enough to spend 15 minutes a day doing eye drills.

Kalani– I mean Xbox never hurt anybody, I always joke around about it but its true. Anything that you can do that’s a high rate of visual input and then you’re reacting to it is really good. One thing I do for eye movement speed is when im driving, I’ll look at the car in front of me and I’ll dart my eyes back and forth from one brake light to the other. It seems so mundane but its kind of fun and difficult. 5. Bust Out The DVD Player

Any training DVD’s you guys can suggest to get better?

Jesse– That Jerry Miculek DVD is really good as far as rifle stuff goes, Jerry Miculek practical rifle I think its called. When I first started shooting I got into the Matt Burkett movies too. Noveske shooting team has some really good videos like outlaw 3-gun. I mean you’re never going to learn everything from a DVD but you’ll get some really good things here and there. Jerry Barnhart, one of the old school Colt shooters back in the day, he’s got a video that’s kind of neat. It’s the same sort of thing, just teaching you the draw, fundamentals and that sort of thing.

Kalani-I’ve looked at them all and overall I’d say get as much information in as possible so you can learn  every point of view out there. For 3-gun obviously get the team Noveske stuff, Miculek stuff, some of the Magpul stuff is fun to watch. If you go out to the range without knowing what you’re doing you’ll end up forming bad habits. You take what you learn in these DVD’s out to the range to confirm or deny if it works.

Which tip is your favorite???? Let us know in the comments below!

All trademarks are property of their respective owners.

« Living For That First Shot Cut To The Chase: A Gear Junkies Guide To Knives »

Living For That First Shot

It’s been a rough week at work, you've been working your butt off on something only to have your boss...