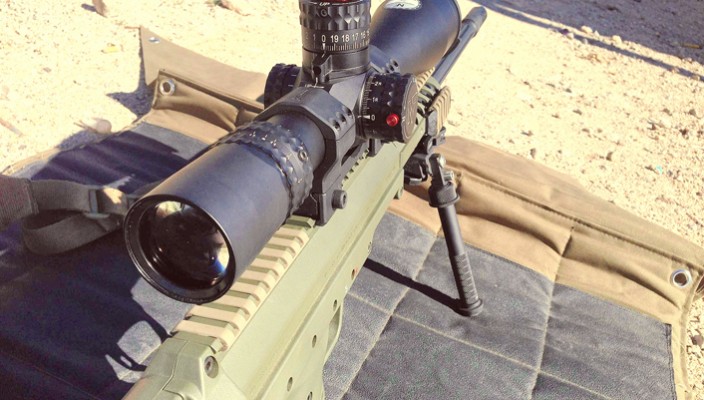 The “B.E.A.S.T.” stands for the Best Example of Advanced Scope Technology and it’s also a really big, heavy beast of a scope. There’s two things that I want to use the BEAST for. One of them being precision rifle matches, with shots from 100 yards out to 900 yards. I also think this scope would be great in the pursuit of long-range hunting out to 500 or 600 yards.  The rifle that I have this scope mounted to is a DTA SRS-A1 bolt rifle in two calibers. It has a quick-detach barrel system and I opted for the 6.5 Creedmoor and 300 Winmag. I’m using the 6.5 barrel for precision rifle matches and the 300 Winmag for hunting.  I could go on and on about what makes the BEAST a great scope for what I need, but in my eyes, I break it down into three important characteristics that are true “deal-breakers” for me with a scope used for my intended applications. In order of importance are the turrets, glass/optical clarity, and special features that make the BEAST stand out from its competitors. I’ve had plenty of time behind this scope using both calibers in my rifle (6.5 Creedmoor and 300 WM). However I spent a little bit more time using the 6.5 setup with this scope. When I first mounted this scope on the gun, I did everything from test the tactile feel of the turret clicks/adjustments, verify the turrets’ return to zero, and measure the click value versus the stated value. The specific model I have is the 5-25 with the Mil turrets and MIL-R reticle. I’m a firm proponent of the Mil radian realm especially when you’re going out to farther distances.

The elevation turret is adjustable in 0.2mil, audible clicks while the windage turret is measured in .1mil click values. What that provides is a huge travel in one turn of the elevation turret, giving the shooter quick adjustments.  One full rotation of the elevation turret will give me 20 mils of adjustment, which is way beyond the range I need for the calibers I’m shooting. Also, this helps me avoid the situation a lot of shooters find themselves in where they can find themselves “lost” in elevation adjustment. They’ll start turning their elevation and do one turn and then another and when they come back to zero, they go one past and they’re high/low. With the BEAST that’s not an issue.

Another thing about the turrets that I like is all the clicks are extremely tactile and aren’t mushy like a lot of lesser quality scopes tend to have. I can’t stress this enough, the clicks are very firm and audible.  Also with other scopes the turrets are small and it’s easy to zip past that one notch that you need, that’s not the case with the large diameter knobs on the BEAST. Make no mistake, the elevation turret on the BEAST is huge. With optical clarity, once you reach a certain level or tier of scopes, it gets really subjective since the glass is so good. Where I class the Nighforce beast’s glass is right at the top. I own a majority of the top of the line scopes and I can accurately say its right up there with Schmidt &Bender, Swarovski, and Kahles. It firmly falls within the realm of very nice glass. If you took the BEAST to the range with a S&B and a Swarovski, the Nightforce is only a smidge below the clarity. In all fairness when you get up in this tier of glass, it’s extremely hard to tell the difference. I had no problem calling my bullet impacts at 1300 yards.

Now I don’t have all the expensive scientific equipment to test optical clarity, but I can tell you that Nightforce put a lot of time into the BEAST and this is one of the best scopes they produce. I guess to sum up the glass, I’m not left wanting at all with the BEAST.

One thing that’s really nice is the eye box forgiveness. Some higher magnification scopes have a notoriously tight eye box that changes as you crank up the mag or the eye relief distance moves as you change the magnification settings. I didn’t see that at all with the BEAST.

Features That Set the Beast Apart From the Pack: The BEAST is a first focal plane scope. This means that the reticle and its subtensions remain the same size in relation to the target throughout the entire magnification range. This is great if you want a wider field of view and still be able to use the hold overs on the reticle. I can shoot an array of targets on 8x for example, zoom all the way to the highest magnification and still have usable subtensions.

Now getting back to the turrets. Like I said earlier, the elevation click value is .2 MIL and that’s good because majority of the things you want to get done, you can do with .2 mil. What the BEAST has however is an I4F, which is a small lever that will give you the ability to adjust in .1 MILs. Here’s an example of how it works, so let’s say my dope says I need 4.3 MILs of elevation. I’ll go to 4.2 MIL’s on the turret, I’ll hit that lever and it’ll give me that extra .1 MIL. Most of the time, for me at least, the .2 MIL increments are more than accurate enough for what I’m shooting at and the distances I’m shoot at.

Another awesome feature of the elevation turret is what Nightforce calls “the brake”. It’s essentially a knob on top of the turret and with a 90 degree twist of it, it locks the turret.  I found this  really useful after setting my zero, I’d use this “brake” so I could throw my rifle in and out of my cases/ bags and not have to worry about losing my zero.

On the windage turret, it’s actually locked on zero until you depress a little red button on the dial. I like this feature more than the “brake” on the elevation turret. It will not allow the windage turret to spin at all without first pressing in that button and you can only spin it one direction. Why I like this is I know without a doubt in my mind that the windage is at zero and isn’t going to change unless I’m the one adjusting it.

Another big win for a scope of this quality and price, is the illuminated reticle. Case and point why this is useful, I was shooting early in the morning on a black steel target. The target blended right in with the reticle on the scope so I flipped on the illumination on its lowest setting and it made all the difference. I have to say at that moment I was really loving this scope.

The last thing that it comes with that I like that not many people think about is the lens caps. These are by far the best lens caps I’ve seen on any scope. For the last couple of months, I’ve noticed they’re super durable. Not only are they tough but with this scope the whole eyepiece turns to adjust the magnification. Therein lies the problem. If you run a scope cover on that and crank up the mag, it’ll hit the rifle receiver at some point. The Tenabraex lens cap ratchets so you can twist them so they’re in whatever orientation you want them at no matter what position the eyepiece is in. Does the Nightforce BEAST deserve your 3,500 hard earned American dollars? The turrets are some, if not the best on any scope on the market. The optical clarity is right up there with scopes that are priced a little higher. Combine that with a ton of other features including intuitive turret locks and excellent scope caps, the BEAST is a total win for me.

I will be shooting this scope for the rest of 2015 on any hunts that I’ll be doing. This includes anything from varmint hunts to some sort of big game hunting, either wolf or black bear. Also this upcoming summer, I plan on shooting a few precision rifle matches and I’ll be able to truly test the capability of the BEAST. 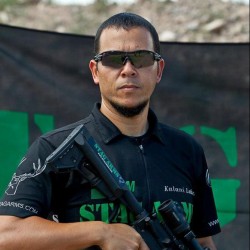 Kalani Laker
Kalani was born and raised in Hawaii on the island of Kauai.When he moved to Arizona, he became an avid hunter and outdoorsman.In 2009, he gravitated towards the exhilarating sport of 3 Gun, quickly rising to the top of the ranks.Today he competes on the 3 Gun Nation Pro Tour and instructs top level military and private citizens on the techniques needed for lightning fast weapons manipulations.A bona fide "self-taught" shooter, Kalani enjoys donating his time to junior shooters, introducing them to the enjoyment of the shooting sports, with a high emphasis placed on safe firearm handling.