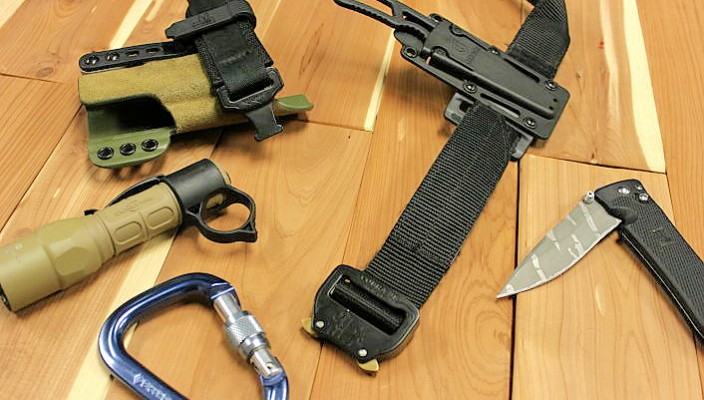 In case you’ve yet to read some of my other posts, I’m a huge proponent of EDC, every day carry. This acronym is not to be confused with that other “EDC” where kids flock to the middle of nowhere to listen to techno music till their ears bleed. I digress. While some people that every day carry items choose to pick cool “gadgets” (there’s nothing wrong with that), I gravitate towards gear that has one purpose, to defend myself.

Everyone’s needs vary based on their lifestyle and local laws but by and large, there’s some sort of self-defense gear that you can carry to protect yourself. So which gear is that? This may seem like a no-brainer but I tend to see way too many people that pay little attention to their belt. If you’re going to be carrying any weapon whether it be a knife, gun or both, your belt is essentially the thing that’s goings to keeping those weapons secure and where they need to be. Heck it’s the thing that holds your pants up and it’s hard to fight with your, as Brett Favre so famously said “pants on the ground”.

So what makes a belt good?

As I mentioned in my importance of a gun belt article, you want a belt that’s stiff. This is crucial when you start hanging knives and firearms off of it. The more predictable and repeatable you can make your draw, gun or knife, the better your chances are for success in a defensive situation and a stiff belt does that. I personally opt for a thick nylon gun belt with kydex inserts sewn in-between the layers like my EDC belt the Blade-Tech Instructors belt. Basically if you can hold a belt horizontally in its circular shape and for the most part the opposite end stays in the same imaginary horizontal axis, it passes the stiff test.

Another equally critical feature is the buckle. You could have the stiffest belt imaginable but if it doesn’t stay cinched down to your desired tightness, the belt is No Bueno and a potential risk to you.  That’s why I opt for belts with uber strong “cobra” or “raptor” buckles. This is one of those things that’s a big personal preference. However, as much as I love the smell of a fresh leather holster, over time a leather holster loses its rigidity. Since the number one job of any holster is to safely retain your firearm, one with flex is bad news. For that reason, a kydex holster built by a reputable company like Blade-Tech, Safariland, or a few others is definitely worth the modest price tag.

Where to position the holster?

I’m not even going to touch that topic because its debated more than 9mm vs. 45acp. However if you decide to carry, make sure you practice with it in that location. Heaven forbid you ever have to draw that pistol in a real life situation, the last thing you want is to fumble around with getting that gun out. Your local laws will be the deciding factor in what size and style of knife you’re able to carry every day. If you’re able to walk around with a fixed blade, I’d say go with that over a folder. Not only is a fixed blade (*full tang) knife going to be stronger than a folding knife but the speed of deploying that weapon is considerably quicker too. Another selling point for me is that when you have a fixed blade in a sheath on your belt, the repeatability of drawing that knife is way higher than its folding cousin. Even with a firm pocket clip on a folder, that knife will have a tendency to move from its original spot, which isn’t good when you reach down to grab for it and it’s not there. If you’re not allowed to have a fixed blade, go with an assisted opening knife and if that’s not legal in your area then an unassisted folder that opens really quickly like this SOG Spec Elite, is a must. Something to keep in mind with knife selection is the blade shape. At the end of the day this is going to be a defensive knife so stick to either a Tanto, Spear Point, Drop point or Bowie blade designs as they are the best suited for self defense applications. This is one of those things that you should bring with you literally EVERYWHERE. You have no excuse because to the best of my knowledge, there’s not a single law or location that prohibits flashlights. I never realized how invaluable a flashlight was until the power went out while I was in Walmart and used this very same light above to get out of the chaotic store. And while majority of phones have lights on them now, the last thing you want to do is drain the battery on your communication device by using the light.

I’ve also found certain flashlights work well at causing very temporary blindness. Which is a great defensive tool if it’s the only thing you have on you. Personally I carry a Surefire G2X with a handy dandy Thyrm switchback attached which allows me to use this handheld light like a weapon light when used correctly. While I like to entertain ideas of fast roping out of a window with my riggers belt, some rope and carabiner, the reality is that’s not a reality for me. One thing that is strikingly possible is being forced in a situation that you have to fight your way out of. Although I won’t be needing a carabiner to fast rope out of a 20 story building, it makes a great impromptu handheld striking device. I don’t advocate using one for violence, sometimes violence is the only answer and when stored in your pocket and in the locked position, all you have to do is slide your hand through the middle and swing away. Not as much mass as brass knuckles but a carabiner is also 100% legal to carry anywhere. I will note that this is a last defense weapon if you don’t have any of the previously mentioned items on hand.

It would be incredibly foolish to read this list of must have personal defense gear and think that by simply carrying all of this stuff and an abracadabra later that you’re the next Ethan Hunt. Yes these tools can make all the difference in a bad situation but only if they’re in the right hands.  So take some defensive classes and learn to master this gear.

Lastly keep in mind whatever you decide to carry it’s got to meet or exceed its designed task first and foremost, looks should always be secondary in what you choose to carry with you day in and day out for self-defense.

Still can’t make sense of self defense EDC gear? Post your questions below! As always guys, shoot em straight and be safe.

Top AR Scopes For Every Budget

Your aluminum and polymer Eugene Stoner amalgamation chambered in .223/5.56 aka the beloved AR-15, is an extremely capable platform....