Top AR Scopes For Every Budget 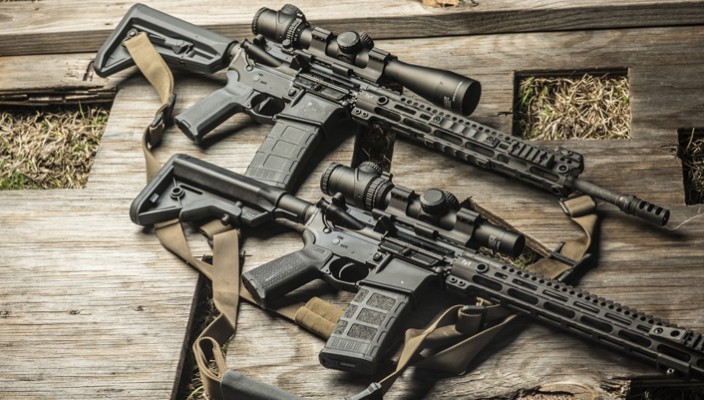 Your aluminum and polymer Eugene Stoner amalgamation chambered in .223/5.56 aka the beloved AR-15, is an extremely capable platform. You name the application and you can bet there’s an AR sitting in someones safe built to excel at that specific function. It goes without saying, the key ingredient to accomplishing what you’re trying to do with your rifle is the optic you select to sit on that precisely spaced upper picatinny rail.

Lately variable power rifle scopes in the 1-4/6/8X range have been all the rage and it’s easy to see why, they allow you to shoot targets up close quickly and push it out to 3,4,500 yards with the twist of the power ring. Because of their popularity, almost every manufacturer has their own dog in this 1-4/6/8X fight. While that’s all fine and dandy, the real question is, the question that plagues every gear purchase-which one is the best for the money? -Weight. At almost 26 ounce before you clamp it on a mount, it’s a heifer.

-The reticle. While I’m a fan of all of the various holdovers, the lower portion of the reticle is way too busy for my tastes. -Illumination that can actually be seen in direct sunlight

-No auto off feature for illumination -CM-R2 Reticle is very fast for engaging close up targets

-Lightweight at only 14.6 ounces -One of the largest FOV’s on the market

-11 illumination settings with off positions in between each setting

-Weight. At 25ish ounces you can definitely feel the difference in balance with this scope mounted to your rifle.

-Not offered in black anodizing -11 illumination settings with off positions in between each setting

-Illumination can be used in direct sunlight and still viewable

-21 ounces without a mount -Like an ACOG, it doesn’t require batteries to give you the illuminated reticle

-Weight. At 14 ounces, its a featherweight.

-Nearly as quick as a red dot sight

-Long in the tooth. While it’s an excellent scope it’s dying for an update. (Spoiler alert, Trijicon’s coming out with a TR25 soon at the same price point but with a 1-6x magnification range.)

-No ballistic reticle so holdovers can be challenging -Excellent value. For just a tick over $300, you get the scope and a mount. Variable scopes are all the rage and for good reason, you can hit targets up close quickly like you’re using a red dot and then push it out to roughly 600 yards. Now that I’ve covered the entire gamut of what’s available based on your budget, I should mention that you get what you pay for with everything in life. With that being said, I’ve never heard of or personally had a poor thing to say about the scopes on the lower end of this list. So which one should you choose? My best advice would be to buy once, and cry once. Meaning if you know you’re going to get a lot use out of the scope, buy the nicest scope you can possibly afford and think of it as an investment into your future happiness.

Still don’t know which one of these optics to throw on your AR? Post your question in the comments below! As always guys, shoot-em straight and be safe.

9 Responses to Top AR Scopes For Every Budget

Almost Everything You Ever Wanted to Know About Night Sights

OK so lets say that tax refund money was just burning a hole in your pocket and HAD to click...