What’s The Point? A Guide to Knife Blade Shapes 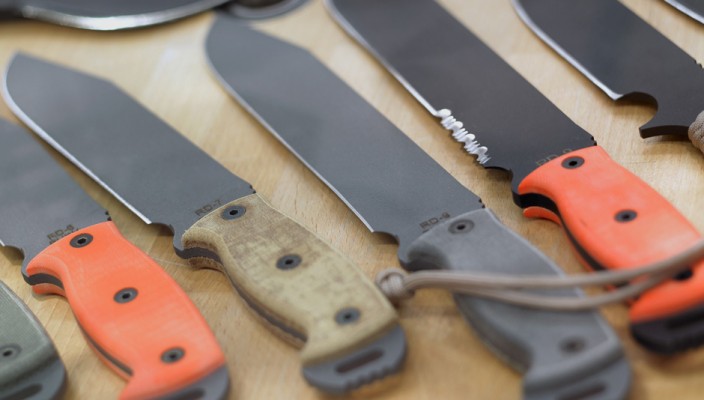 When talking about all of this crazy tactical and hunting gear, it helps to truly know what you’re talking about. Now no one on the face of the earth knows everything and no one said you had to. There are however a few building blocks or key bits of information that every gear junkie needs to know.  No matter if you’re just getting into knives or want to brush up on the terminology, knowing the correct names of blade shapes is paramount.

The blade shapes that I point out are by no means the definitive guide to what is out on the market. There is absolutely no way for me to go over every radical blade shape in existence and doing so would be counterproductive. I would like to go over a few of the most popular shapes and give you the variety of uses that the blade will excel at. Drop Point– This may be one of the most popular knife shapes on the planet. Don’t let its good looks fool you, the drop point is the workhorse of the bunch. You know you’re looking at a drop point when you see that large swooping belly and long spine meeting to a point that slightly “drops” near the tip, hence the name “drop point”. Due to that big belly, this type of blade shape is right at home skinning animals. And because of the shape of the blade, the tip is extremely strong. Also the thicker flat spine of this design allows for superior batoning (a technique to spilt wood by using a blade as a wedge and another log as a mallet).  If you asked me, “Jeremy, if I was dropped on a deserted island and could only bring one knife which blade type should I bring?”, a drop point blade  would be me choice all day, every day and twice on Sunday. Tanto- Sporting a design that originates from the days of the Samurai, you know it’s a Tanto blade when the spine of the knife meets the blade at a sharp angular point. If a tactical blade is what you’re looking for, then look no further. The Tanto blade is the go-to design for military and law enforcement personal. Because of the reinforced tip, this blade gets high marks for it’s piercing ability but it also provides ample chopping or slicing performance. In a pinch this could be used as a survival knife but the design hinders fine detail work as well as skinning game. Clip Point- Stemming from the days of the Alamo, Jim Bowie was the man that made this blade design famous with his Bowie Knife. This blade is similar to the drop point but the front point of this knife looks like it was clipped off. I wonder where they came up with the name for this blade style? There’s a reason you see this blade in many of the movies like Rambo and Crocodile Dundee, it screams “don’t mess with me or else”. The menacing clipped point allows the blade to plunge relatively easy into many surfaces.  However due to the slim and sharp point, the tip is easier to break than its tanto and drop point brothers. What is lacks in strength, it makes up for in overall controllability. In my opinion if I couldn’t have a drop point blade for survival, then a clip point blade would be my next choice. Spear Point- Once again, there’s no secret where the name for this blade shape came from. A spear point is easily discerned by symmetrical double edges meeting at a center point. This design is often considered as a dagger and is the premier choice for a throwing knife. Thanks to the dual edges and reinforced point, the spear point has the ultimate piercing performance. Why should you pick up a spear point style knife? A medium sized fixed spear point could be lashed to a long stick in a survival situation to create an extremely useful way of hunting. This wouldn’t be my first choice for a deserted island due to the fact that the double edge makes it quite difficult to do any batoning. Also keep in mind that you lose the ability to choke down on the knife for detail work. I do think that if you need a knife solely for defending yourself, a spear point is the only choice. Serrations- Those little scallops that you see at the bottom of a blade aren’t there to make the knife look cool, they actually serve a purpose. The little points and small concaved edges of serrations make them cutting machines. When using the serrations you’ll cut much quicker than you would if you had a normal blade. The serrations don’t slice through objects like a plain edge, rather in a way they tear it apart. They’re great for utility tasks like cutting rope, slicing cardboard, and opening boxes. Many people are torn when it comes to getting a knife with or without serrations. On one hand they are great for utility tasks but on the other you lose some of that valuable space where a big belly could be.

Hopefully this gives you a better understanding of the terminology when it comes to some of the more common blades that are on the market. Personally, I own multiple knives  in every blade shape. Everyday I wake up and decide what knife to carry that day. Whether it be a 5 inch tanto folder or a fixed drop point, they all do the same thing, they cut, slice, pierce, poke, and chop. The design of some knives allows them to be better at some tasks than they are at others. Remember you aren’t going to be able to do everything imaginable with a single knife, so it’s best to accept that now before you get your hopes up.

Still can’t make sense of knife jargon? Ask your question in the box below!

6 Responses to What’s The Point? A Guide to Knife Blade Shapes

For over 165 years, the folks at Carl Zeiss have been mastering all things glass. When you pick up a...