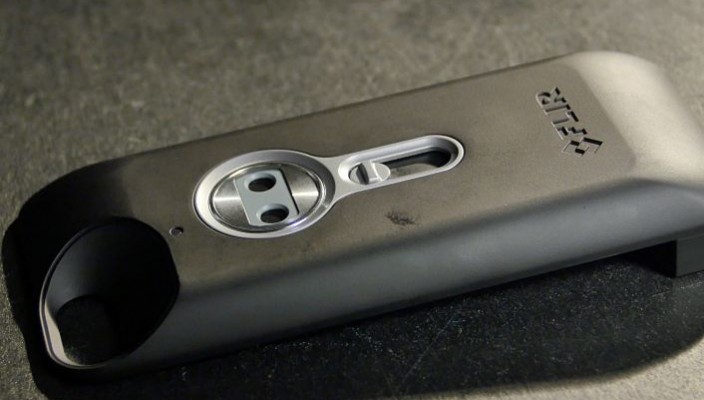 How cool would it be if you could take real thermal images with an iPhone? I’m not talking about those cheesy effects in photobooth, but real Predator vision that can see heat “foot prints”, see cold spots in your home, and even see in total darkness. There’s an app for that… to be exact, there’s an app and a device for that. It’s called the FLIR One. It’s a device that attaches to your iPhone 5 or 5S, and turns your fruit ninja playing device into something more useful. The part of the FLIR one system that houses visible light and thermal cameras, as well as the battery and other pieces of hardware. This is the headphone jack adapter, which allows you to plug in mic/button-enabled headsets. Depending on your type of headsets, this might not be necessary. Charging of the FLIR One device is done with a Micro USB cord. Once the FLIR One is fully charged, the unit will then begin topping off your iPhone. The connecting interface begins with the supplied phone housing. It goes on like a normal phone case. Notice the hole where the apple logo is, as this locks into the mount on the FLIR device. The FLIR One plugs right into the iPhone when the case is locked into the mount. To start using the device, you’ll need to download the free app on the Apple App Store. There are several apps that FLIR has designed for use with the FLIR One, but the basic one is all that is needed in order to view live thermal images, as well as take photos and videos in IR. Running the App is simplistic. It walks you through instructions the first time you use it but in the spirit of education, lets run through the basics. The advanced settings lets you set emissivity (type of surface you are reading such as smooth like glass, or matte/dull), save your GPS coordinates, save the photos you take right in you iPhone photo gallery (all photos are saved in your app’s memory cache in either case), and change your temp units from Metric to ‘Murica. The light on helps the visible light camera to pick up line details, so that you can easily tell exactly what’s what in low light. The Spot Meter lets you measure temperatures without making physical contact. As you can see in this image, my niece is sporting a mean temperature. She was not faking it to get out of school that day. The app will let you know when you need to calibrate the device in order to get the most accurate readings. The process takes a few seconds, and is easily done with tactile feel. Not calibrating the FLIR when prompted to still means you can see temperature variances, but the Spot Meter will not run without calibration. The upper right icon lets you sift through 9 different image profiles. Once you take a photo, you can later change that color profile as well (changing color profiles is not available for videos after the fact). Here’s the exact same image in all 9 of the color profiles so you can choose the flavor of the day.

So what do I think of the FLIR One?

–So far, I love it. It’s something I can pull out when I’m in the field to get extra info on the scene we are investigating, or around the house when checking on potential water problems.  It’s a bit bulky, but fits nicely in my backpack next to other gear. My only complaint is that it’s so far only available for the iPhone 5 and 5S, which is about 175$ when I bought it, so it’d be nice to have a regular iPod option, and wish maybe there was a good screen protector. Bottom line, is that the FLIR One makes it possible to own an infrared device which is great for work, and a good amount of fun outside of work.

Contrary to what we see in the latest action blockbusters, you actually have to aim a shotgun. Shocker I know,...