Long range shooting is a discipline that challenges a shooter’s basic marksmanship skills, understanding of their equipment, and knowledge about ballistics. Some people dedicate their lives to it and push themselves to find the limits of their abilities. Just last year, for example, a team of shooters set a world record for the longest rifle shot. They hit a target 4-miles away.

It seems logical that a distance would define long range shooting, but experts describe it more in terms of effort and equipment.

Litz is a coach with the U.S. Rifle Team and also founded the company Applied Ballistics, which researches and consults for ballistics-related projects.

Litz explains a .22-caliber rifle zeroed for 50 yards could work at 100 yards, but it may need significant adjustments beyond that. “So, 150 yards could be a long range shot for something like a .22 rimfire,” he said.

So, the working definition of long range shooting is anytime you have to significantly adjust your zero to hit your target.

If you still want to assign a distance to long range shooting, look no further than competitive shooting. They embody the spirit of Litz’s definition in that they pair ranges and events that challenge a shooter and his or her equipment.

The International Confederation of Fullbore Rifle Association requires shooters compete at targets ranging from 300 to 1,000 yards while using rifles chambered in either 5.56mm/.223 Remington or 7.62x51mm/.308 Winchester.

The Precision Rifle Series has shooters compete at unknown distances that range from 10 to more than 800 yards. Depending on the category, shooters are required to use rifles .30 caliber or smaller, or they’re limited to 5.56mm/.223 Remington or 7.62x51mm/.308 Winchester.

And, the National Rifle League, or NRL22, requires shooters compete at the 100-yard range using a .22-caliber rimfire rifle.

And Then There’s Extended Long Range

Extended long range shooting is a form where, as Litz explains, the target is so far away that the bullet slows to its transonic speed, or the speed of sound. ELR is its own category because it requires advanced knowledge of ballistics.

“Those transonic effects are more complex and difficult to account for than the bullet flying through supersonic range, which is relatively well-behaved,” says Litz, whose team of shooters took the top four spots at the first King of 2-Mile, a shooting competition that works up to a target 2-miles away.

Long range shooting can be an expensive endeavor to pursue. To get started, though, you just need a rifle, scope, and ammunition.

When buying a long range rifle, Litz says you should consider application. For example, hunters or tactical shooters will need to move and engage targets rapidly, so they’ll want something with greater maneuverability like a magazine-fed semi-auto with a short barrel.

On the other hand, if you’re in a situation where you can take your time and go after one target at a time, you’d want a rifle with a long and heavy barrel to help with stability.

Besides application, Litz says “a good long range rifle is going to allow you to mount a scope properly … It’s going to let you make adjustments that are necessary for the positions you’ll be shooting from.”

According to Litz, many shooters start their long range journey with a Remington 700. It’s a classic bolt-action rifle that has long served as the basis for sniper and hunting rifles. However, the more involved you get in long range shooting, the quicker you’ll find limitations to factory rifles. 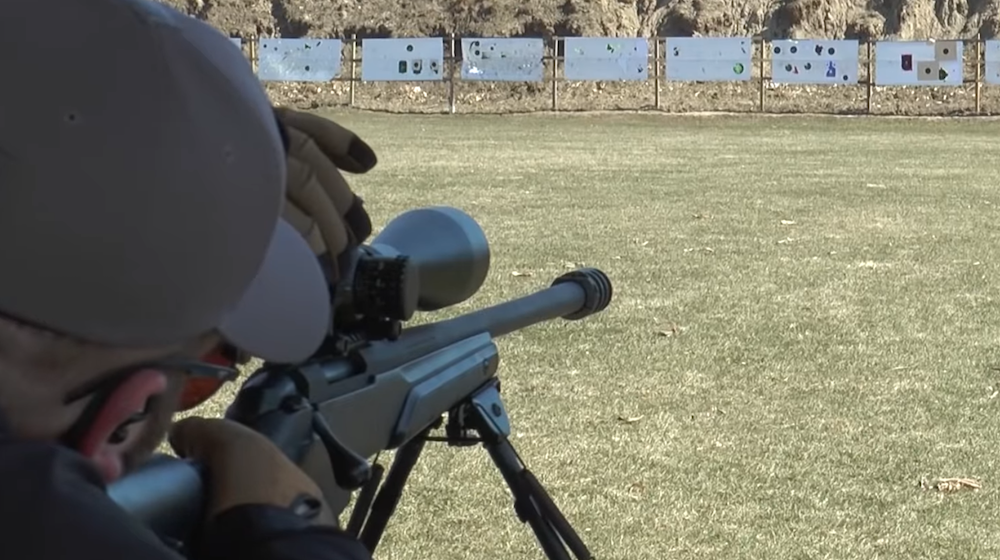 The long-range rifle should match both the shooter’s and the application’s needs.

“You can run that factory gun as it is for a period of time, but the barrel is eventually going to hold you back,” Litz says. He adds, “You’ll learn a lot, but you really can’t optimize (performance) until you select a fast twist-rate barrel and get the highest (ballistic coefficient) bullets.”

(Another reason the Remington 700 is so popular is it’s been in production since the early 1960s, so there are a ton of aftermarket products available to upgrade it.)

Starting out, you should buy a long range rifle that fits your application, can properly hold a scope, and actually fits your body. A factory rifle will be fine in the beginning, but if you keep at it, you’ll need to upgrade.

For long distance shooting, the rifle scope is the most important feature. According to Litz, the scope will have a greater impact on how you perform on the range than the rifle will.

“Personally, I would rather have a one-minute rifle and an excellent scope that’s mounted solidly because then I’ll be able to center my one-minute group on the target reliably,” Litz says.

(“Minute” refers to Minute of Angle, a measurement used to identify the angle between two things like the hash marks on a reticle or the hits on a target.)

When considering a long range scope, Litz suggests getting one with a large diameter scope tube, like 30mm or 34mm, because it will allow for a larger adjustment range.

In that same vein, he also suggests using a scope base with additional cant or MOA built in. This increases the elevation range of a rifle scope.

Other features to consider include locking turrets, which allow you to lock in a zero and adjustments, and not accidentally undo them if you bump the scope. 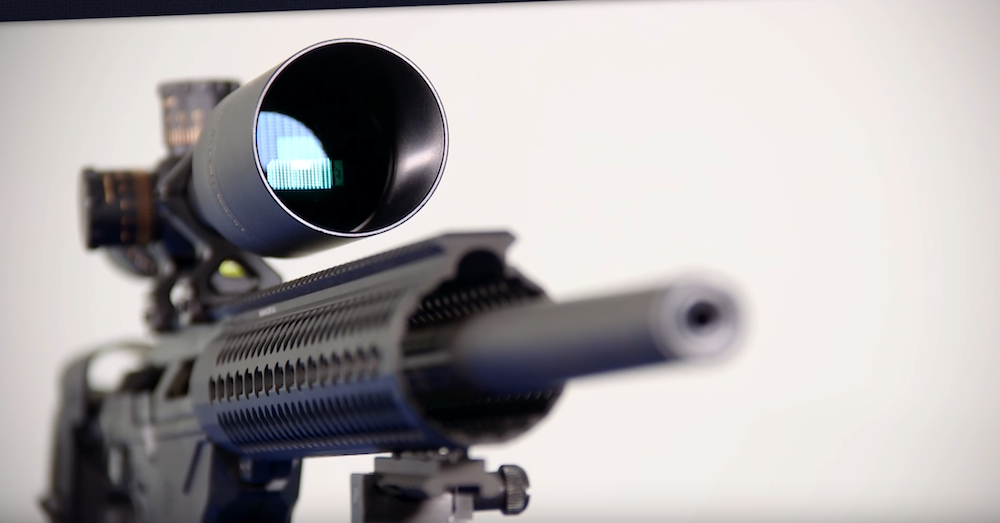 An ideal long-range scope has a large adjustment range.

A long range scope will allow for a wide-range of internal adjustments. If you want to learn more about buying a scope, check out How to Choose a Riflescope.

When you’re shopping for long range ammunition, the keyword is consistency. “What you want to end up with is ammo that groups well, has high ballistic coefficient bullets, and consistent muzzle velocities,” Litz says.

The reason you want a high ballistic coefficient bullet, as Litz explains, is it will retain its velocity as it travels downrange. However, ammunition is not a one-size-fits-all item. “You may have to try a few different types in your rifle to find something that your rifle will actually shoot well,” Litz says.

In the end, if you want good rifle ammo, you have to read the numbers on the back of the box and do some of your own testing. The other option, according to Litz, is handloading. That is if you have the time.

“Getting into handloading is meticulous and it takes a long time to learn, but ultimately you’ll be making ammunition that is tailored for your rifle,” Litz says. “There simply won’t be anything better for your rifle than what you can develop through individual handloads.”

Once you have a rifle, scope, and ammunition, you will have enough to start your long range endeavor. However, there’s always more gear you could buy. While these items might not improve your shooting, they could make life easier.

A long-range shooter getting an estimate of the range with a rangefinder.

All the equipment in the world wouldn’t mean a thing if you didn’t know how to use it. The following are long range shooting tips you would need to develop in order to be an effective long range marksman.

In addition to literally writing the book on long range shooting, Cleckner is a former sniper with the Army Rangers who conducted missions in Afghanistan, taught sniper skills to soldiers and police, and even coached long range shooting for contestants on the TV show Top Shot.

The key piece of advice he shares is “no matter what position you’re in, you need to get as stable as possible.” What he means by that is your body and rifle need to be set up so the only thing that moves is your trigger finger.

Cleckner suggests one way you could accomplish this is by using a bipod or a bag to support the front of your gun. Whichever you choose is a matter of preference, but he prefers the bag.

“I do it for two reasons. One, it gives me a consistent stable platform to shoot the rifle off of, and two, it allows me access to my gear,” Cleckner says. He explains the bag will conform to whatever is underneath it whereas the bipod might react or bounce depending on what it sits on.

After getting your footing, he advises just simply following the rules for basic rifle marksmanship. These include:

While there are multiple external ballistic factors that affect the bullet as it travels downrange — air pressure, temperature, spin drift, Coriolis effect, and, of course, gravity — one you’ll address more often is wind.

Determining how the wind will affect the bullet on its way to the target is one of the hardest parts about long range shooting. The challenge to reading the wind, as Cleckner explains, is not just figuring out the wind’s direction and speed, but also at what distance it’s blowing.

An obvious solution to reading the wind is using a wind meter, but, as Cleckner points out, it’s not always practical because you’d have to go to various points on the range to read the wind there. Another solution is looking at range flags, but those won’t always be available.

However, Cleckner has a practical solution. He suggests picking a distance about two-thirds of the way down the range and observing the wind there. You can do this with an optic.

“The direction and how those heat waves are behaving will tell you what the wind is doing,” Cleckner says, and adds it doesn’t really matter if it’s hot or cold outside because heat waves will naturally appear if you’re looking through a good scope.

The way in which the waves travel will reveal how fast the wind blows. For instance:

While operating a scope can be reduced to twisting dials until your sights align with where you want to shoot, doing it effectively and efficiently requires some technical skills and knowledge.

Understanding concepts like Minutes of Angle or Mils will help you zero your rifle and make adjustments as needed during a course of fire. While both terms are angular measurements, they aren’t exactly the same thing.

A scope turret with 1/8 MOA clicks.

As Cleckner explains, you can associate MOA with the English system of measurements, like inches and yards, and Mil with the Metrics system. While twisting the turret, MOA operates in quarter turns (ex. ¼, ½ or ⅛ clicks) and Mil operates in tenths (0.1 or 0.2 clicks).

This is an oversimplification of those concepts, but it’s important to understand the difference because a scope will be designed for either MOA or Mil concepts.

Is long range shooting for you?

This guide alone will not be able to fully describe and teach you about the products, skills, and technique needed to be a successful long range shooter. In fact, it just scratches the surface. The goal, however, is to introduce the ideas, so you can seek out additional instruction and, more importantly, practice at the range.

« Best Hunting Guns: What Should You Check Before Choosing a Firearm for Hunting? How to Shoot a Moving Target: 2 Key Methods & Applications »