How to Practice Shooting at Home: 6 Dry Fire Training Tools

In 2020, gun owners developed a strong desire to practice shooting at home. That’s because the gun industry had a record-setting year for gun and ammo sales as many gun buyers responded to the Coronavirus pandemic, social unrest, and political dissent. Demand, especially for ammunition, continued to outpace supply at the beginning of 2021.

Now, shooters want to learn how to practice shooting at home because it either costs too much for ammo or they just can’t find it. In this article, you’ll learn ways to practice and sharpen your shooting skills without live rounds.

Why You should Practice Shooting at Home

Shooting is a sensorial experience. You hear the bang, feel the recoil, see the muzzle flash, and smell burnt gunpowder. Some people shoot for that experience alone. It’s a thrill like driving a fast car. Others do it because they enjoy the challenge of controlling a small explosion and hitting their mark. A skilled shooter aims to master the mechanical movements of operation.

Great marksmanship requires perfecting a series of basic movements. These include standing, gripping, drawing, aiming, breathing, and pulling the trigger. Adding ammo into the mix will reveal if you’re doing it correctly, but it will also exaggerate mistakes when you do them incorrectly.

No ammo? You’re not the only one.

Believe it or not, you can do a lot of the hard work off the range. You don’t need live ammo at all to refine the movements to shoot a gun. Instead, you develop muscle memory through practice and repetition while going through the motions.

What this all boils down to is a term called “dry fire.” Dry fire training – or dry firing, dry shooting, dry practice – means you follow all the steps necessary to shoot a gun without live ammo. And it’s a way you can practice shooting at home.

While shooting practice can improve technique, traditionally, dry firing has two downsides. First, you have to recharge your gun for every follow-up shot. And second, you can’t see progress until you get back on the range. This guide will highlight products that rectify one or both of those issues.

Snap caps, or dummy rounds, are the most basic dry fire tool. They protect firing components in rimfire firearms, revolvers, and some older models. When you load them into a magazine, they add weight like live rounds. You can also create malfunction drills like double feeds and then practice remedial action. However, snap caps won’t enhance target practice at home, but we’ll return to this later.

Depending on the brand, the dry fire magazine will contain certain additional features. For example, the DryFireMag makes an audible clicking noise and you can adjust spring tension to increase or decrease trigger pull weight. Another one is the DAA Dry-Fire Practice Magazine. It has a weighted body so it feels like a loaded mag.

In short, a dry fire magazine will enhance the overall dry fire experience. A single mag costs around $100. 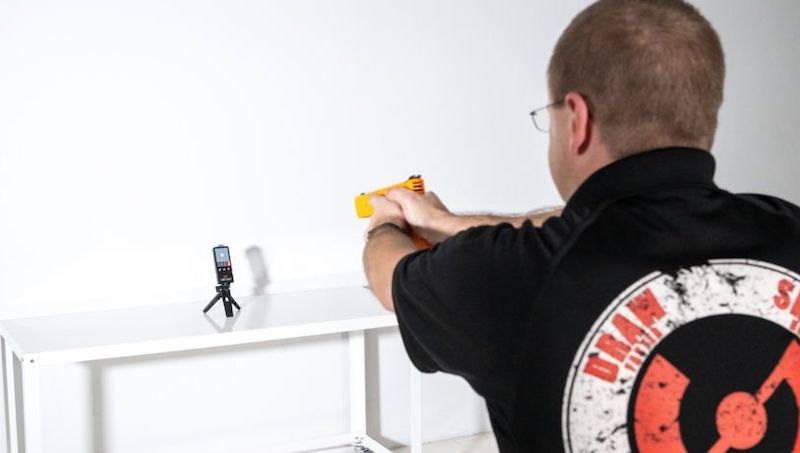 A laser cartridge shoots out a laser beam so you can see the point of impact during dry fire practice. The cartridge is designed to lodge inside the chamber so it won’t extract when you recock your gun. The big advantage to laser target practice is you can see where you hit the target. A single cartridge ranges in price from $60 to a little more than $100.

While you can use a dry fire laser cartridge to shoot at whatever target you have, most laser cartridge manufacturers produce targets as well. These laser targets tend to be reactive in some way. They also tend to be on the expensive side at $200 to $300, but they offer some training benefits.

G-Sight offers pistol cartridges, but each one is sized for a specific caliber. These include standard sizes from .380 to .45. They also offer cartridges for .45 Long Colt and Makarov pistols. G-Sight sells basic paper targets, but for training purposes, they offer a free training app that includes drills and records shot placement.

Laser Ammo offers standard pistol, revolver, and AR cartridges, but they also have adapter kits, so you can re-calibrate the cartridge. They offer Glock-specific cartridges that vibrate as well.

Additionally, they offer both interactive and training targets with a host of functionality. For example, the Laser PET system records time and shots and also allows you to swap out the actual target to simulate different ranges. However, the systems will not work with non-Laser Ammo cartridges.

A dry training fire system usually includes a device that you mount to your firearm and software that you need to download on a smartphone or computer. The system is programmed to collect and record several data points like shot placement, muzzle movement, shot time, etc. And then it will also help you analyze and interpret the results so you can improve your technique during target practice at home.

Mantis X is a smart sensor that attaches to a Picatinny rail and collects data points on your shots. You can then review the data for patterns using an app on a smartphone. The device was originally designed for live fire practice, but the company says its software has been updated for dry fire training. Also, Mantis X offers laser cartridges and kits that pair with the device. 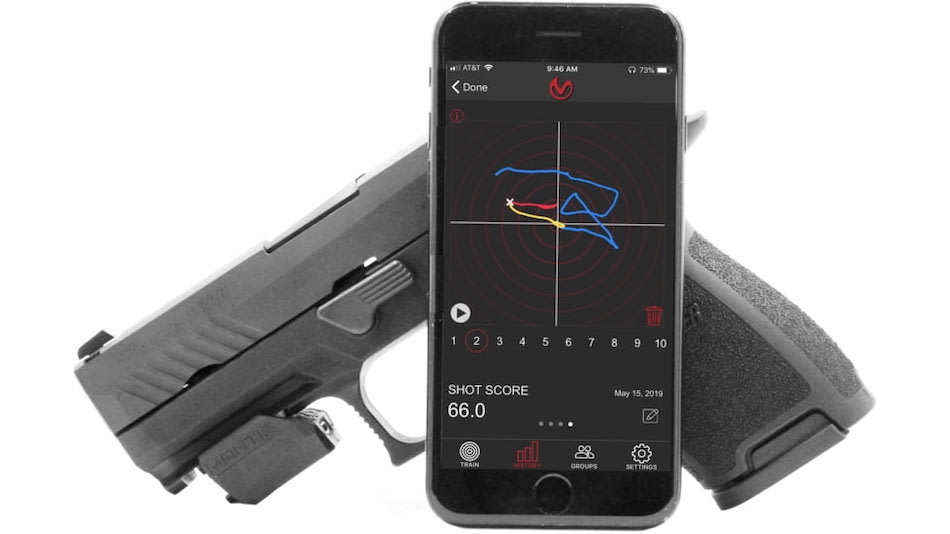 iTarget is a training kit that requires a smartphone. An iTarget kit comes with a target, a sled for your phone, and a laser cartridge. For it to work, you need to mount your phone in the sled, aim the camera at the target, load the laser cartridge in your pistol, and then point and shoot.

iDryfire is a scaled-down version of iMarksman, software designed for law enforcement and military applications. However, iDryfire offers target and scenario-based training as well. An iDryfire kit includes the software, a camera, and a training cartridge. It will work with any PC.

LaserHIT is a training kit that functions using a smartphone but allows you to also pair with your TV, so you can see hits on target in real-time. A LaserHIT kit comes with a training cartridge, phone stand and tripod, and a wireless TV adapter.

Laser training guns range from very realistic to something more akin to a dummy gun. They operate like real firearms in that they have a trigger and sights, but they aren’t firearms. They were built specifically for dry fire. They shoot out a laser beam and are typically compatible with other laser training targets. It’s just another way to do laser target practice.

The purpose of a dry fire laser training gun is to significantly reduce the stakes of gun handling during target shooting or scenario-based training. There’s absolutely no risk of an accidental or negligent discharge. Despite that fact, you still treat it as if it were real and exercise gun safety.

The Shot Indicating Resetting Trigger (SIRT) Trainer Pistols by Next Level Training have the look and feel of a real pistol sans the recoil, slide lock, and noise. The trigger resets, a laser beams out with every shot, and the magazine is removable.

There are multiple SIRT guns. They’re designed to replicate popular duty weapons and even some rifles, but red paint on key components indicates that they’re trainers. The price starts at $240.

Not to be confused with “smart guns,” which is completely a different topic, Smart Firearm Training Devices are trainers that replicate popular duty weapons, but they look like dummy guns. Some are yellow, some are blue, and others are black with an orange tip.

On Smart Firearm Training Devices, the trigger resets, a laser beams out, and they have a removable magazine. Additionally, they make a gunshot noise when you pull the trigger and they’re equipped with warning sensors to flag safety issues like a finger lingering inside the trigger guard. The price starts at $240.

LaserLyte training pistols have the weight and trigger pull of a real gun, but they’re available in three generic designs: a full-size Glock, a compact Glock, and a Smith & Wesson revolver. The price starts at $135.

Most airsoft guns replicate the looks of the firearm they’re designed after. Their controls are also very similar. Therefore, you can simulate all the movements of operating an actual firearm like racking the slide, inserting and removing magazines, pulling the trigger, and some of them actually recoil. 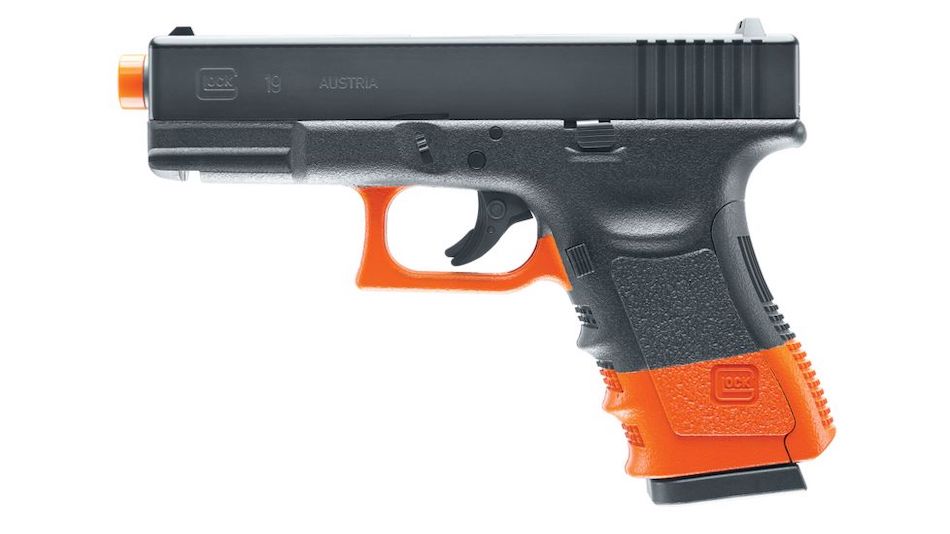 Airsoft guns shoot plastic pellets or BBs, and they shouldn’t be confused with air guns, which generally shoot a metal projectile that can be deadly. An airsoft gun is powered in one of three ways: spring, gas, or electric.

While airsoft guns are easy to dismiss as toys, more and more shooters are giving them a serious look as a training tool. Plus, they require exercising the same technique, so they’re effective for shooting practice and target practice. Traditionally, gun manufacturers licensed other companies to make replicas of their guns, but recently major gun manufacturers like Sig Sauer have started producing airsoft guns on their own.

Snap caps won’t necessarily improve dry fire training, but they can improve your live-fire training. That is whenever you can finally get back on the range. It’s called “The Snap Cap Drill.”

Beth Alcazar, an editor for USCCA magazine, explains the snap cap drill is essentially mixing snap caps in with live ammunition when you’re loading magazines. The idea is this: a snap cap represents a malfunction, so in response, you’re supposed to either take remedial action or change the magazine.

“The dummy round is one of your best friends, really, because you can use it for a lot of different things,” she said, but the most important thing, she added, is you can use snap caps as a “diagnosis tool.”

“We are naturally fighting what our body wants to do (when shooting). Physically and mentally, we’re fighting these things. We have this reaction … when that gun is moving and we are shooting, sometimes we have the natural reaction of bringing that gun down,” Alcazar said.

The key thing to look for during snap cap drills is flinching. If you are flinching during shooting practice, and it’s ruining your shots, you should condition yourself to remove or ignore that feeling of anticipation.

As you can see, there are a lot of training tools available that allow you to practice shooting at home. Just to reiterate, this article covered the following products:

What are some of the tools you use for dry shooting? Tell us in the comments below.

« How to Clean a Gun: Beginner’s Guide to Cleaning Firearms Eye Dominance: Why Shooters Need to Find Their Dominant Eye »

How to Clean a Gun: Beginner’s Guide to Cleaning Firearms

After reading this guide, you’ll know what gun cleaning supplies to buy and gain a better understanding of how to...