Stalked In Darkness: Preparing for Next Year 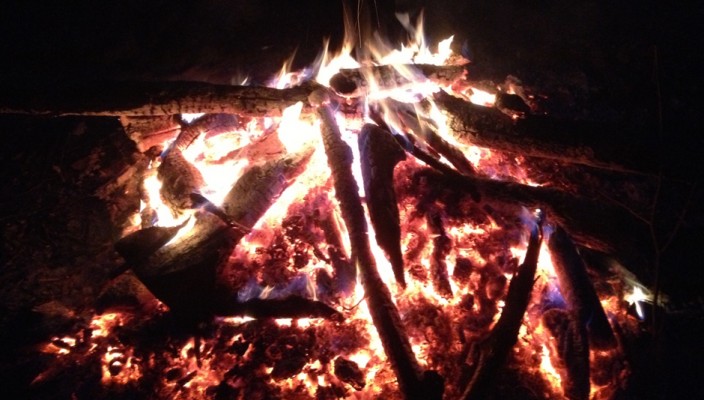 When the dark consumes the woods and you can’t even get a little moonlight to help guide your way, it’s extremely easy to get turned around.  Darkness falls on the woods and confusion follows swiftly after. This can happen to anyone, regardless of your knowledge about the lay of the land. To get to some of my favorite spots, I have to scale rock faces and navigate through steep ridges. Crevices often serve as my only way in or out of these spots, and when there is no ambient light for my eyes, finding that single entry point can become a very difficult task. Sure, I COULD walk in and out of hollers tripping on sticks and rocks while I attempt to grid the entire rock wall, but I also like to get back to the campfire before midnight! Hunting over the years across several different geographic areas and topographies has taught me a few things, and one of the most important things I have learned is that you never know what is around the corner, or what you might run into out there – especially at night. Some things can be planned for and proper measures, when taken in advance, can limit the effect of external factors on your hunt, but some things just cannot be predicted or foreseen.

Hunting for me is more than the thrill of the kill and getting my freezer full. It’s about blending in with Mother Nature to the extent that nothing is aware of presence. Sometimes I become too involved and sit well past the sun has set and the darkness consumes the woods. I have seen far more wildlife as a result of staying put in the dark, which is always beneficial for scouting and tracking purposes. Of course, no matter the benefits of using the dark as your natural cover, things can go wrong.

Recently, for the first time in my life, I was followed through the woods in the early morning darkness by a creature that was circling me and my hunting partner about 10-25 yards away from us. For a good 30 minute stretch,  as we moved, so did the animal – in a slow, methodical circle. We knew that whatever the animal was it was large, the few branches it would break as it circled like a shark -were not the light snaps of breaking twigs made by deer or coyotes.

Through multiple pauses and attempts to stop and get a visual on the animal, we grew more and more concerned as nothing was revealed. Moving and stopping began to give us the feeling that we were being hunted by a greater predator than us. At this point in time, I knew there was a definite issue at hand and that my plan thus far needed modification immediately. Whenever I walk into the woods with another hunter, I make sure to alter my pace and steps so that we can walk together and appear to sound as one animal, not two. In an effort to sound more than just one animal and frighten this unwanted guest away, I broke this protocol. Our footsteps out of sync, we continued on.

The thicket blocked the beam from the flashlight so much that we finally gave up on trying to gain a visual and pressed ahead, armed only with bows our bows. The ever so slight sounds of the animal circling us just grew more repetitive, as though the circles had increased in speed around us. As we would continue to stop and take measures to gauge the silent hunter’s position, we would hear deep breaths from the darkness. We pressed on until I placed my hunting partner in one of my favorite spots where there was very limited access and he was off the ground – high in a rock face and not in a tree. I then moved into the darkness and back towards the direction we had came, hoping to lure our dark passenger into the depths of the woods with me and leave my friend out of the equation. The animal did just that, watching me, I fearfully knew, the whole time.

I climbed trees. I sat still. I threw things – all in an effort to confuse the animal and provide me with visual proof of whatever was stalking me. All to no avail. I sat that entire morning trying to focus on the hunt, but the entire time, I was the hunted one. The animal never seemed to depart the area as there was no exit noises, and that morning a pin drop could be heard for miles. Not a breeze to be had, not the light tapping of morning dew dripping off the trees – the only sound was that of my heart and the crinkling fall leaves that serve to alert the woods to the smallest animal’s presence. Sitting in the dark for the remaining hour or so before daylight, I knew very well the animal hadn’t left me. There were no squirrels to confuse as deer; the birds chirping with the rising sunlight were non-existent; the usual suspects in the woods apparently knew far more than I. Everything was hiding or had fled the area. Thankfully, we made it out, and after a bit of research and tracking, I discovered that mountain lions are undoubtedly moving into the area.

So I have decided that next year, instead of this ever happening again or relying on a small trail marker, shotgun shell, or old arrow placed in a tree, I’m going go high tech with the OPMOD Carson DNV 1.0 Mini Aura Digital Night Vision Pocket Monocular. This thing is perfect for serious hunters. Why, you ask? Have you ever snuck into the woods in the wee hours of the morning before first light,  only to realize that the last thing you wanted to do was hit your flashlight? Every needed to find your way home, or lost your trail, or misplaced your blind in the dark? This lets you see all and far beyond the singular beam of the flashlight. Small? Yes, your palm or pocket make the perfect fit!

This year, I will take out the element of darkness, in case I’m not the only hunter in the woods…

Avid outdoorsman who loves to spend his time fishing, hunting, and golfing or just about anything outdoors! If he can't make it to the woods or water, chances are you can find him walking his dogs. Follow Alex P. as he tackles questions, and read his reviews of todays new products!

The human eye has more than two million moving parts and is one of the most sensitive parts of our body....