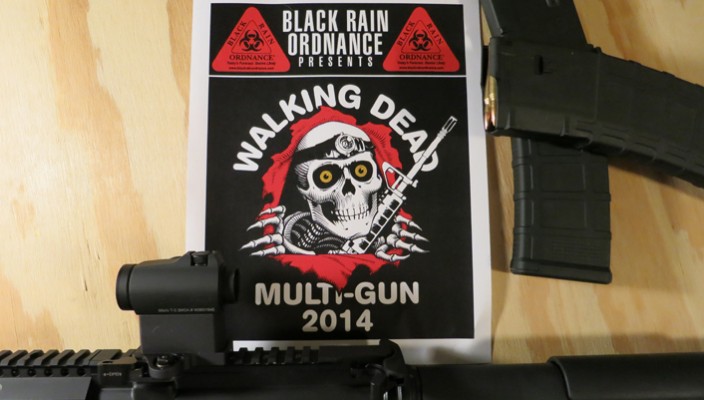 I’m writing this on a plane home from Dallas, shoehorned in the middle economy seat and a few drinks deep, so I’ll just apologize now if I go off on a few tangents here or there. I don’t know who said it or where I heard it, but it goes something like this: “The journey doesn’t start til something goes wrong.” All things considered, that’s what my trip to the 2014 Walking Dead Multi-gun in Cresson, Texas truly was, a journey. And yes, a few things went haywire from the get-go…

Where to start….of course Chicago had to defend its title “The Windy City” on the day I’m set to meet up with Jesse Tischauser. After several hectic flight cancelations, delays and a lot of running around the O’Hare departure terminal, I finally managed to make it on a flight to Houston. Because of these delays I ended up missing my connecting flight to Oklahoma City by a mere 10 minutes. To use the word lightly- I was pissed. After a long night of fun on Halloween in Houston, I was up early for another flight to rendezvous with Jesse in OKC. We grabbed a quick meal containing a steak the size of my head, and were off to the Walking Dead Multi-Gun with one extra pro pew pew’r along for the ride, Chris Andersen. Pulling up to the match just 40 minutes before we were supposed to go hot on the range, we had enough ammo and Red Bull to have a hell of a good time-which is exactly what we did. I failed to mention the best part of this match –  it was going to be shot completely in the dark! You were allowed red dot sights, lights, and lasers on your rifle, pistol and shotgun. I was lucky enough to have Jesse loan me a whole a 3-Gun weapon package that would make most men’s’ eyes water like a teenage girl’s first Justin Bieber concert.

I know what some of you may be thinking: “shooting with lasers is easy, you don’t even have to aim”. You couldn’t be more wrong! Not only were you forced to start each stage with lights and lasers OFF, but all of the zombie paper targets had to be headshots only. Another contributing factor (and a big reason why I had a ton of penalties) was that majority of the zombie targets had “no shoots” in front of them. Put simply, you had to blast these zombies in a head box no bigger than a cantaloupe, all the while avoiding the limbs of no shoots. To top it off, there was a line drawn around the head that you had to stay within which was clearly drawn by a 4 year old. Let’s just say it was no small feat walking away from a stage without a debilitating penalty or two. I don’t want it to come off like I’m complaining, as this was one of the most fun 3-gun matches I’ve shot (then again it was only my second one). Nevertheless, one of the best things about the match was that I had a dream team squad of competitors, including Kalani Laker, Jesse Tischauser, Chris Andersen, and BJ Norris, all of which are top tier pro shooters. I swear shooting one match with these guys gave me insight that would probably take me a whole month of shooting local matches to get.

I could ramble on for hours about all the cool things at the match or how fast I shot a certain stage, but I doubt any of you want to hear that. However one of the reasons you should go to the next Walking Dead Multi-Gun is the side match. Normally on these side matches you have to shoot some wild unicorn gun quickly on the clock. This almost always results in you A. not liking the gun and/or B. not getting enough time to actually check out the gun and appreciate it. Fortunately this side match, hosted by FLIR, Black Rain Ordnance, AAC and TNVC, wasn’t one of those setups. We got to take a nice break from the fast paced shooting and throw some suppressed subsonic 300 blackout out past 100 yards on three different guns. I especially liked this little distraction because I live in Crook County Illinois and can’t own a suppressor, so it was a nice treat.

Another reason I’ll definitely be back to the Lone Star State for this match next year is the final stage.  In the pitch dark we had to have our shotgun loaded to 8+1 at the buzzer and take out 23 pepper popper targets as they became visible, while sitting in a UTV that was traveling at around 5mph. To sum it up it was an adrenaline rush like I’ve never felt before. Had I totally jacked up that stage I probably wouldn’t be telling you how it was my favorite, but thankfully this wasn’t the case.  Adding to my high after finishing the stage and only missing five targets was the fact that I beat one of the pro’s I was shooting with. I’m not going to name any names because he could outshoot me any day of the week [COUGH COUGH BJ]. Besides keeping us up til 5am for the awards ceremony, the Match Director, Jeff Chase did a great job of finding sponsors for the match. He also showed this city boy right here one hell of a good time.  The real “cherry on top” for me was where I placed. I knew I was getting a little delirious after pulling an all-nighter, but when they read my name off at 21st place I almost couldn’t believe it. Say what you will about finishing 21st out of over 130 shooters, but for only being my second match, I was ecstatic.

It’s been said that for every good thing comes something bad. Sitting here on the plane reminiscing, it’s hard to think of anything bad to come from this. Well actually, I guess there is one: I’m hooked. Money, time, other hobbies are infinitesimal in my mind; moving forward it’s clear to me the only thing that matters is 3-Gun.

The word is out on our new OPMOD Vortex StrikeFire II, and it's incendiary to say the least. We know that every shooter...