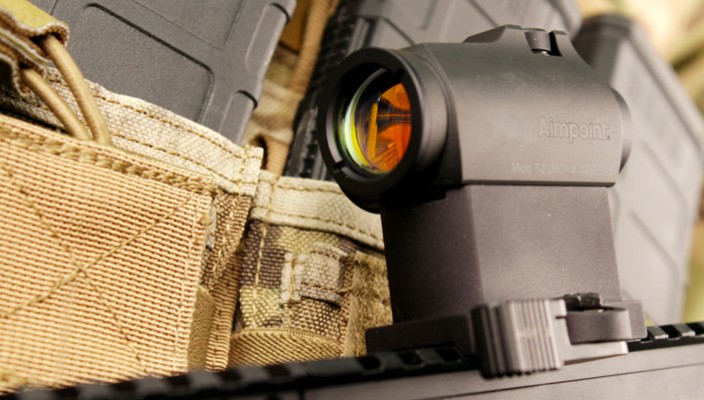 It goes without saying, that I’m no Larry Vickers. Now that I got that out of the way, if you came here to see me shoot out to infinity and beyond with a 2moa , non magnified red dot sight then you better look elsewhere. Because that just ain’t going to happen.  I did however test this optic in the way that I know it’s meant to excel at but more on that later.

When in the market for a red dot sight, its hard to beat an Aimpoint T-1. The way I look at it, The T-1 is like a Porsche 911. In that sure its beyond some peoples budget but in the quest for the best overall package of styling, performance, and build quality- you cant beat it. So how do you top such an icon in the red dot world? I’ll make it clear right now, the T-2 is by no means “reinventing the wheel”. Instead what you get are subtle improvements.

The differences between the T-1 and T-2:

-For starters the exterior has several. The windage adjustment knob on the T-2 now has a noticeable almost aerodynamic ramp protecting it.

-The exterior of the T-2 is 6mm or .3 of an inch longer. This is mostly due to the extended lip on the objective and ocular lens for the included lens caps.

-The T-2 come with some of the best see through lens caps I’ve ever seen.

-The dot itself on the T-2 is one of the crispest you’ll find on a non-glass etched red dot and is improved over the T-1.

-Nice glass. You get next to no weird color hue’s of green in the glass like you find in practically every red dot.

-Weight. The sight itself on the T-2 is .4 oz heavier. When mounted to the included base, the T-2 is 1.2 oz heavier than the T-1 in the same configuration.

-The T-1 is a matte finish whereas the T-2 is a semi-matte. In my opinion the T-2’s finish matches identical to the anodizing on my AR.

-The nearly infinite battery life. Since receiving the T-2 a week before Halloween,  It’s been constantly on the 8th power setting. For a red dot that boasts a 5 year battery life, I see no need to turn the dang thing off.

-If there’s one thing I cant stand, its an illuminated  reticle/dot that isn’t crisp. While this may not be so important on close range shots, its paramount when you dabble with some long range action. The dot on the T-2 is as crisp as freshly printed two dollar bill-extra crispy.

-Although I’m not a fan of lens caps and immediately took them off, I truly appreciate that Aimpoint decided to throw in a really nice pair.

-The quality. Majority of you reading this aren’t going to buy this red dot because its expensive. While I can definitely relate, those that decide to take the plunge will quickly notice that this is one BAMF red dot.

Ehhh Not So Great

-The obvious criticism is the price. In the mid $700 ball park its going to take some strong negotiating skills to slip this purchase past your wife.

-The windage adjustment cap. This is easily my biggest gripe with the red dot. On the T-1 both of the caps have two dimples on the outside to make your adjustments. On the T-2, the elevation cap has the two dimples but the windage is a screwdriver slot. What this means is in order to adjust the windage you need to not only remove that cap but also take off the elevation cap to adjust it. If I was a betting man, I’d put my money on a lot of calls to Aimpoint about replacement windage and elevation caps.

-The brightness settings. This criticism carries over from the T-1 and while I fully understand the need to have night vision settings, theres only about 4 settings out of 12 that you’ll actually use. If I wasn’t in the market for a bombproof variable power scope, I’d pick one of these up all day, everyday and twice on Sunday. We all know that rarely in this world, especially with gun gear do you get more than you pay for. If you want the best you’ve got to pay the piper, which in this case is only a little more cash money than comparable red dots. To sum it up, looking for a red dot? Suck it up and buy the T-2!

Let me know why the Aimpoint T-2 is on your Xmas list in the comments below. As always guys, shoot-em straight and be safe!

7 Responses to Aimpoint Micro T-2 :The Evolution of Greatness