The TSA-Compliant Leatherman PS Style – So Safe it gets in the Cockpit! 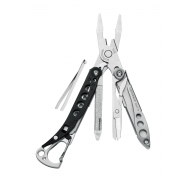 The big struggle a lot of people have with their multi-tools is their compliance with TSA regulations. Many items that were once okay to bring on a plane are now banned, so what if you need to bring tools with you and you don’t wish to check them?

Leatherman has come up with a solution. Since they’re all about producing the best multitools and knives on the market, Leatherman looked really closely at TSA regulations and found exactly what is and what is not allowed on an airplane. The result of their efforts is the Leatherman PS Style. This multitool has been tested at over 300 airport security lines, and while some of the security staff needed to be shown that the tool is compliant with their rules, the PS Style has always gotten through security.

It wouldn’t be a multitool with a number of different tools, so with the PS Style you’ll have a spring-action needlenose pliers, a spring-action regular pliers, spring-action wire cutters, a pair of scissors, a nail file, tweezers, flat head and Phillips head screwdrivers, a carabiner and a bottle opener. That’s a lot of tools in a small package, and you can have them all on an airplane! The carabiner makes it easy to attach to a backpack, keychain or belt buckle, so you won’t need to worry about it once it’s packed. 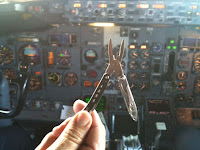 There are a lot of Leatherman Tools, but you have to be careful which one you try to bring onto a plane, but the PS Style is compliant and you shouldn’t run into any problems.

We just recently found out that a Leatherman representative took his PS Style onto a plane and was able to not only get a picture of it on the plane, but he had the pilot holding it in the cockpit! A few minutes after takeoff a flight attendant asked to borrow the PS Style Multitool to fix the PA system. Pretty cool.

Have you ever been out hunting when the battery in your rifle scope or red dot sight dies? While many...