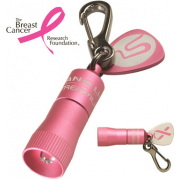 As it is once again October I thought it best to remind everyone that it’s National Breast Cancer Awareness Month. A number of great organizations and charities increase their efforts to raise money for breast cancer research and awareness programs. Awareness is especially important, as even with all the advancements in the treatment of this deadly disease, the best way to keep yourself safe is to be vigilant with early detection. Decades after it was first used as a means of detecting cancer, mammography still saves more lives from breast cancer than anything else.

As awareness is so important in saving lives, many organizations, even those with no overt connection to cancer research, lend their support every October. For instance, the NFL has added pink to their colors for the month, both on player uniforms and on official merchandise. If those big tough guys can wear a bit of pink, so can you.

If you want to add a little pink to your gear setup while also getting a great flashlight that supports a Breast Cancer Charity, check out the Streamlight Pink Nano Light with White LED Flashlight.

While many companies talk about their support for Breast Cancer Organizations, Streamlight has put their money where their mouth is with the Pink Nano Light. For each Nano Light sold Streamlight will donate $1 to the Breast Cancer Research Foundation, which is a fantastic organization geared toward raising awareness and money for research.

The Pink Nano Flashlight weighs only .36 oz. and measures 1.47″ long, but it also has a long-lasting and powerful LED that provides 10 lumens of light. The 4 included alkaline button cell batteries will last for up to 8 hours. With the Nano light you have a fantastic flashlight that’s perfect for a keychain, purse or pocket!

The Breast Cancer Research Foundation (BCRF) is one of the top breast cancer charities because it is focused on putting every dime of the donations toward research and awareness. So many charities have a ton of overhead that eats away at donations, but 90 cents out of every dollar donated to the BCRF goes directly to breast cancer research. Over their nearly 20 year history, the BCRF has donated over $330 million, which has gone toward researching genetic factors in contracting breast cancer, new early detection methods such as MRIs for women with a higher than average risk, and numerous treatment options, from health initiatives (women with a normal body weight are more likely to survive than those over or under weight) to new drug programs.

The BCRF understands that there may never be a single “cure” for breast cancer, as there are so many forms it can take, but by advancing the diagnosis, treatment and prevention of breast cancer they hope to see a day where as few people pass away from the disease as possible.

Show your support for the wonderful women in your life this October by purchasing a Streamlight Pink Nano Light for yourself, and maybe one for that special lady too.

The 3D HDTV Revolution is Now at OpticsPlanet with 3D Glasses!

We are always trying to add cool new styles of eyewear to our inventory here at OpticsPlanet. We have great...