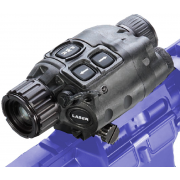 Thermal Imaging has come a long ways. Top manufacturers, such as Insight Technology, have constantly improved the technology and purposes for thermal imagers.

Thermography detects radiation in the infrared part of the electromagnetic spectrum to create images. Dependant on the type of thermal imager you have, hotter objects will be either brighter or a different color. As everything emits some amount of infrared radiation, it is possible to see your surroundings without an external light source.

There are a couple thermal imaging-related news items that I thought were pretty cool. First, Oregon firefighters have started using thermal imagers to help them navigate smoke-filled buildings and locate people. Smoky buildings are extremely hazardous, with structural damage making every step a risk, but the smoke can also hide the presence of fire. Sure, the firefighters are aware that where there’s smoke, there’s generally fire, but sometimes there’s a blaze on the other side of a door or wall, and the firefighter can’t see the light from beneath the door. All their protective equipment can also make it difficult to feel the heat.

Thermal imaging gives firemen more information on where they’re at, and where they’re going. If you’ve seen the movie Backdraft you’ll know how dangerous opening a door in a fire can be, but when you’ve gone into a building to save lives, this can be nearly impossible to avoid. When you open the door to a previously oxygen-deprived environment, the sudden influx of oxygen can cause an explosion and massive spread of an otherwise contained fire. Knowing that there’s a huge amount of heat behind that door before turning the handle gives firefighters a better chance to prepare.

But seeing a person who has perhaps passed out due to smoke inhalation can also be challenging. A fireman may walk right past a victim because of thick smoke, but a thermal imager would give them the ability to not only see that person, but also to see where people have been recently. I’ve personally seen this principle in action (not in a burning building) and it’s pretty neat. If you ever have the opportunity to use a thermal imager, put your hand on a table or wall for a few seconds and pull it away. The residual heat will show your hand print for a little while before dissipating. Firefighters can use this to see where someone has recently been, aiding them in their search.

The technology in thermal imagers has come a long way to allow a firefighter to use them in the midst of a blaze. Not only are they more precise, but they’re sturdier too. For example, take a look at the Insight Technology WTM Weapon-Mounted Visual Laser Mini-Thermal Monocular. In the past, thermal imagers couldn’t hold up to the shock and stresses put on them by the recoil of a gun, but the WTM Weapon Mounted Thermal Monocular was designed to take recoil and keep working perfectly. It’s also waterproof, so though there are a number of delicate electronic components in the WTM, it’s been put together with a tough case and great design to make it rugged and reliable. Not that long ago a little water or some shaking would have destroyed a thermal imager. Not with today’s units from Insight Technology.

The other item in the news I noticed made me smile. In Hastings Michigan, the local police department has a few thermal imagers, and recently used one to catch an alleged meth cooker. The suspect was fleeing from police at night and was dressed in black, making him difficult to see. The police grabbed their thermal imager and caught the man as he was hiding inside of a pile of leaves.

I’m pretty sure Bugs Bunny tried that once also.

The police officers said they might not have found him if not for the thermal imager. I suppose criminals will also have to retire the classic ‘hide behind a bush’ technique. These Insight Technology Thermal Imagers are just too good to fool.

Voting has started for the 2011 Brilliance Awards! Vote now for your favorite brands and enter our sweepstakes for your...