Can You Hear Me Now? Good 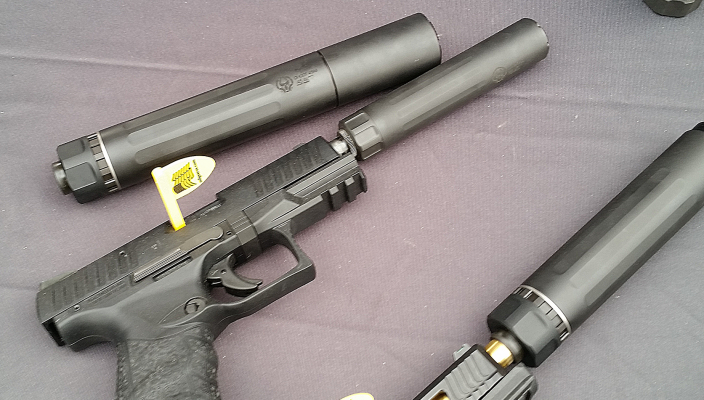 One of the best comments I’ve recently heard about firearm’s regulations was that if the first firearm was invented tomorrow, OSHA would mandate that suppressors be sold with every gun. If you were at SHOT Show this year, you might’ve gotten the impression that was true. Coming from the restrictive state of IL, I had never gotten to use a suppressor before. After media day, I felt like I had been using them for years. Just like we saw the nationwide push and battle for conceal carry in every state, suppressor reformation is the new front line in the war on firearm regulations. Here’s some base information in case you live in a dark state like me.

According to Wikipedia, “A suppressor, sound suppressor, sound moderator, or silencer is a device attached to or part of the barrel of a firearm or air gun which reduces the amount of noise and visible muzzle flash generated by firing.” So just like the muffler on your car mitigates the engine noise, suppressors do the same for firearms. Currently in the US, suppressors are legal to possess in 41 out of 50 states and most of those states permit using suppressors while hunting. In fact, the American Suppressor Association has been pushing hard recently to show legislators that suppressors are an invaluable tool while hunting. Hearing loss/damage should be a major concern for all shooters, but especially hunters as they rely on their sense of hearing to monitor their surroundings. Typical ear protection such as ear plugs or earmuffs dampen ambient noises, which causes hunters to forgo them. Suppressors provide a safe hearing option that maintains full situational awareness, which benefits not just the hunter but also anyone in the nearby area. Sensing that suppressors are becoming more common and easier to acquire, the shooting industry has seen significant growth focused on that product area, Major firearm manufacturer’s such as Sig Sauer and Ruger now produce in-house suppressors, and even the manufacturer’s not producing suppressors are supporting them with threaded barrels, suppressor height night sights, subsonic ammo, and other accessories. SilencerCo, Surefire, and other manufacturers like Liberty Suppressors are producing “cans” for almost every caliber and platform that you can think of. OSS is challenging the status quo with their “flow through suppressor” design that has been described as a “jet engine in reverse”. A major issue with suppressors is “blow back”, where the gas that usually escapes out the muzzle gets forced backwards until it can find an escape point. This can lead to hot gas in the face or clog a firearm up with extra debris. The OSS design circumvents this by not trapping the gas at the end with a sealed cap like traditional suppressors do, which is pretty revolutionary. If you need to see it to believe it, check out their video where they test fire a .50bmg in an enclosed room. Wow.

So while suppressors can be expensive and will impact semi-auto firearm’s function in some way, they provide numerous benefits and really enhance all types of shooting. So if you haven’t used a suppressor yet, don’t pass up the chance when you get the opportunity. Join the ASA and combat the myths with facts. Make a choice. Fight the Noise. « Who Brought a Knife to a Gun Show? Get Stabilized! Monopods, Bipods, Tripods, and Shooting Sticks: What is the best option for your purposes? »