What Does a Warrior Wear for the Maximum Warrior Challenge?

Maxim magazine is running a really cool contest, called Maximum Warrior.  I can’t tell you how badly I wish I could participate.  I have no doubt I’d get creamed by the professionals they have competing, but just the chance to learn and develop this type of combat training would be amazing.  So what is Maximum Warrior?  Basically it’s a 10 week challenge with 10 different warriors.  They compete against each other in combat based trials, a different one each week.  These challenges test different parts of military training and expertise.

Week one covered WADI Patrol.  The warriors are sent out in an ultra-light tactical vehicle with the mission to rescue a downed pilot.  The pilot is just a mannequin, but the scenario is very realistic.  These guys have to fight through flashbang grenades, past IEDs, smoke and they have to neutralize targets.  It’s really intense, and that’s just week ONE!  These challenges get more and more intense as the Maximum Warrior contestants move into more physical challenges that require all their strength, and increasingly all their cunning.  I don’t want to steal all the thunder of Maximum Warrior, so definitely head over to their site to watch the episodes for the first three weeks.  I honestly love that I work for OpticsPlanet, because I just spend the last 15-20 minutes enjoying every second of the Maximum Warrior Challenge!

Head over to the Maximum Warrior site to see the great videos.  What I want to share with you directly are Maximum Warrior’s “What a Warrior Wears” videos.  These are really cool too.  They’re hosted by Karl Erickson, who hosts the show.  This guy knows his stuff.  We actually met him at SHOT Show.  Erickson is retired from the Army Special Forces, and he’s one serious dude.  I’m glad to have him be part of our Armed Forces.  In the video above he takes you through some of the gear real warriors wear.  He starts with the body armor and shows what soldiers place in the various pouches for maximum effectiveness.  It’s cool to see how he explains the rating for the ballistic plates in the body armor.  I knew those plates could take a couple hits, but they’re not going to hold up forever.  I guess they can take about 10 shots.  I can’t imagine being shot 10 times, but I’d be glad to have one capable of taking multiple shots.

But it’s what he packs on that body armor that really interested me.  Erickson runs through magazine pouches (It’s no coincidence that Erickson is in front of a BLACKHAWK! banner, because they make a ton of great gear for real warriors, so when you need real tactical gear they’re the perfect brand to start with.) and what he puts in the rest of his pouches.  This isn’t basic gear.  Real soldiers don’t use pouches to carry candy bars (I’m not admitting I’ve used a pouch for this), they have explosive ordnance disposal gear and extra magazines.

This gear isn’t just good for soldiers though.  I know hunters who swear by BLACKHAWK!, and if you take the no-nonsense approach that the military has you’re sure to be more successful.  You might want a game call rather than explosives ordnance disposal gear, but extra mags at your fingertips is always going to help (or shells for your shotgun, etc.).  Be sure to check out the video above and check out a couple teaser pics below to learn more about the competition and see what a Warrior Wears for the Maximum Warrior Challenge! 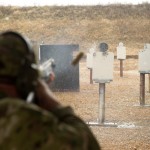 Maximum Warrior Challenge at the Range 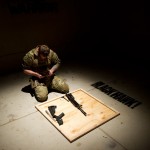 Do you know your weapon? Maximum Warrior Challenge! 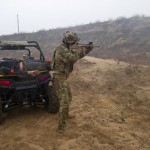 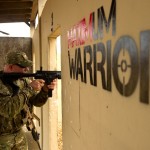 Do you think you’re tough enough to be the Maximum Warrior?

4 Responses to What Does a Warrior Wear for the Maximum Warrior Challenge?

« Swarovski Modular Spotting Scopes and Z6 Rifle Scopes from SHOT Show! Behind the Ear for Phenomenal Sound by Pro-Ears! »