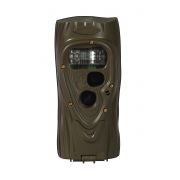 Cuddeback has a 25 year history of making outstanding trail cameras. Starting out with classic film cameras, Cuddeback has adapted to changing technology to add digital cameras and an IR function to their trail cameras. Their latest product line is the Cuddeback Attack Trail Camera, with two options available.

The Cuddeback Attack Trail Camera combines simplicity and high quality images to give hunters an superb scouting option. The first thing to note is the speed of the hair trigger. The camera has a motion detector that will pick up a deer running at 20 feet per second and snap a photo. Since the whole point of the camera is to track game, you’ll need this fast trigger speed or the deer would be gone when the picture is taken and you’ll just see the forest.

The Attack series has been in development for 3 years, and Cuddeback considered all the features that hunters would need. A big factor was simplicity. While the trail camera has a ton of features and can perform a number of tasks, the simple design and limited number of buttons makes for ease of use. A single dial controls many of the features, from switching date and time settings to changing the delay time from as little as 15 seconds to as much as 30 minutes. The flip of a swithc changes the camera from still photos to video.

This trail camera from Cuddeback uses an SD card to store photos, although if you happen to forget the card there is also internal memory so you’ll always be covered. The stored photos can be transferred using either an SD card or USB drive. It doesn’t get much simpler than that.

But say you want to take nighttime photos too. You’re going to want an Infrared camera for that. A flash can scare away game, so that while you get a picture, the deer may learn to stay away from the camera, turning all your efforts to scout the area useless. Fortunately, the Cuddeback Attack IR Trail Camera has what you’ll need. In addition to providing the same great trigger time and daytime photo viewing ability, the Attack IR Trail Camera also takes clear nighttime photos.

Unlike the regular Attack Camera, the Attack IR camera doesn’t have the built in memory, so you’ll want to be sure to bring along that SD card, but with the clear pictures and video you get day or night you’ll have an awesome option available to scout out your favorite stomping grounds this hunting season.

We love Cuddeback here at OpticsPlanet. They’ve been making great trail cameras for a quarter century, and every new line features their signature attention to detail so that you get the best pictures of game at your hunting site. Take a look today and I’m sure you’ll come away impressed!